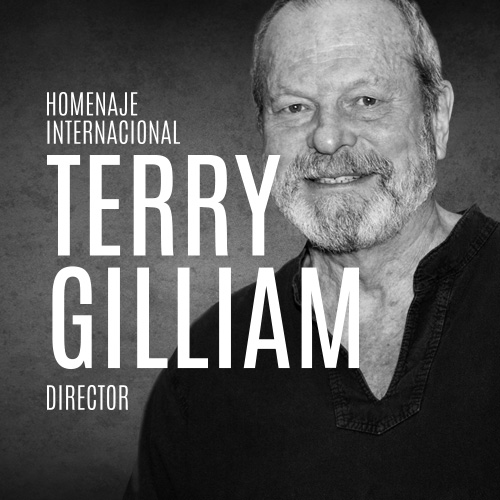 An auteur capable of going from the darkest to the brightest, creating works that seek to expand consciousness through humor, creativity and even a touch of madness.

Finding a voice is not easy for a filmmaker. Staying current despite the passage of time is also not easy, and yet Terry Gilliam has achieved it. His style brings audiences face-to-face with a peculiar way to see the world, combining comedy, fantasy, science fiction, adventure and drama in a unique work that tends to be beautifully bizarre.

Throughout his notable filmography, Gilliam has explored imagination and its importance in life in various ways, promoting a necessary challenge of authority and placing his characters in plots with a certain dark tone that are defined by their surprising endings.

Born in Minneapolis, Minnesota on November 22, 1940, Terence Vance Gilliam spent his childhood in a rural community surrounded by nature that allowed him to develop his imagination from an early age. His artistic curiosity and his need to express himself were noticeable through his childhood drawings that he used to make others laugh. At age 12 he moved to Los Angeles and became a fan of MAD magazine, which changed his perspective on the world and probably sparked his peculiar sense of humor.

Gilliam from Occidental College in Los Angeles with a B.A. in Political Sciences in 1962. While in college he oversaw the school’s Fang magazine, which he modeled after New York’s satirical Help! magazine. After graduating, he travelled to New York to get a job in publishing and was hired at Help! Magazine, where he began his career as a cartoonist.

In the middle of the political turmoil in the United States in the 1960’s, Gilliam decided to move to England where he got a job as an animator at a children’s television program. This decision would change his life forever, since this is where he met Terry Jones, Eric Idle and Michael Palin, three of his five co-creators of Monty Python —the iconic comedy group that found a way to synthetize the most abrasive surrealism with a dose of English idiosyncrasies and a side of absurdism.

After the premiere of Monty Python’s Flying Circus in 1969, its creators became the most popular and creative comedians of the moment. Throughout four seasons, they did whatever they could get away with in a television format, creating a free playful style that has yet to be matched. They then arrived at the big screen with And Now for Something Completely Different (1971), Monty Python and the Holy Grail (1975), Monty Python’s Life of Brian (1979) and Monty Python’s The Meaning of Life (1983) —and years later they would adapt their sketches for the stage.

Within the group, Terry Gilliam was responsible for the dazzling animated segments, wrote some of the scripts and acted occasionally. He took on several roles in the films and stage plays, as writer and director of Monty Python and the Holy Grail (1975), his feature film debut.

Restless and eager to tell his own stories, Gilliam premiered his first film in 1977 outside of Monty Python: Jabberwocky, a fantasy inspired by Lewis Carroll’s poem of the same name. This film announced the path he would take with future projects. This film received mixed reviews from critics and audiences, but it made clear this filmmaker was someone to watch.

Then, with Time Bandits (1981) he would begin his so-called “Imagination Trilogy”, centered on the fight to defend imagination and freedom of thought. This was the story of a boy who travelled through time with a group of rowdy dwarves that became Terry Gilliam’s first great film and made him an auteur worth following. The second film in this trilogy was more inclined toward science fiction, while maintaining the already established visual style. Brazil (1985), a dystopian, retro-futuristic fantasy with touches of Orwell and Kafka, earned two BAFTA awards and two Academy Award nominations, including one for Best Original Screenplay. The trilogy culminated with the fantasy epic The Adventures of Baron Munchausen (1989), which became a reference for the fantasy aesthetic established in the late 1980’s.

With The Fisher King (1991), starring Robin Williams and Jeff Bridges, Gilliam introduced an effective blend of comedy and drama in a tale about friendship, love and moving on no matter what tragedies come about. The film earned an Academy Award for Best Supporting Actress for Mercedes Ruehl and was signaled out in other awards ceremonies such as BAFTA, the Golden Globes and the Saturn Awards, as well as the Venice and Toronto International Film Festivals.

12 Monkeys (1995) takes us to a desolate future that may be saved through time travel. The plot is clever: a study on the subjective nature of memories, as well as a celebration of madness that includes two of the defining characters of 1990’s science fiction—the rough and vulnerable James Cole, played by Bruce Willis and the deranged Jeffrey Goines, a Brad Pitt performance that would earn an Academy Award nomination.

Next, Gilliam adapted Hunter S. Thompson’s Fear and Loathing in Las Vegas (1998) into a psychedelic drug trip that blew the minds of an entire generation and earned a cult status, following the misadventures of two strange characters who travel at full speed to the middle of the decadent soul of the United States.

Gilliam returned to fantasy, applying his impressive visual style and borrowing from classic tales, with The Brothers Grimm (2005), and then immediately made his most poetic and disturbing film yet: Tideland (2005). In The Imaginarium of Doctor Parnassus (2009), Gilliam reflects on the true consequences of the decisions we make. Influenced by fantastical legends, this film is also a celebration of its star Heath Ledger, who died before he finished shooting.

After the release of The Zero Theorem, which brought us another clever and visually striking science fiction story, Terry Gilliam finally premiered his dream project at the 2018 edition of the Cannes Film Festival: The Man Who Killed Don Quixote. Gilliam had been working on this film since 1989 and had to overcome all kinds of obstacles before he could bring it to life. The Man Who Killed Don Quixote is a true example of tenacity and tireless struggle to express oneself no matter the cost.

A defender of imagination with a true adventurous spirit, a creator of parallel realities and fantastical worlds in which everything is possible, a visionary storyteller and a rebel who knows how to use comedy as a weapon of mass expression: that is Terry Gilliam. His characters are often to overcome fragility to put that is apparently against them in their favor and thus live through the adventures that come their way on their own terms.

“There’s a side of me that always fell for manic things, frenzied, cartoony performances. I always liked sideshows, freakshows.”. This is how Gilliam explains his peculiar way of seeing the world and we can take this phrase as a glimpse into how he comes up with his stories.

The Guanajuato International Film Festival is proud to pay in its 22nd edition a deserved tribute to Terry Gilliam, a true liberator of souls and one of the tireless soldiers of cinema whom, with his work, has granted us a space to commune with the highest capacities of the spirit, of dreams and the wild side of imagination.