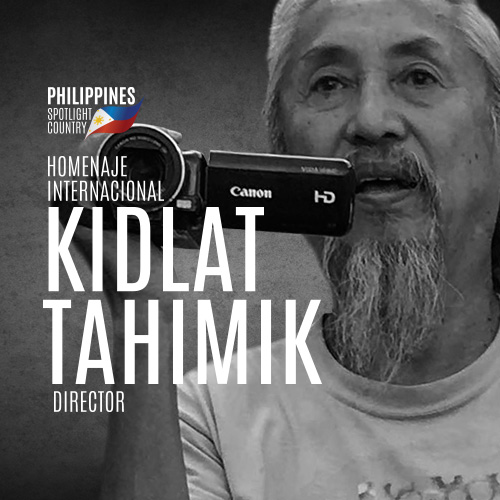 With Kidlat Tahimik, the films and the filmmaker are one. He has continually invented himself through his cinema, and so his cinema is as singular as the man.

by Patrick F. Campos, Film Institute of the University of the Philippines

Born as Eric de Guia in 1942 in the American-fashioned Baguio City, north of Luzon, he received his MBA from Wharton and worked as an economist in France before stumbling upon a 16mm Bolex in Germany. In an act of defiance that recalled the Filipino revolutionaries’ tearing of their cédulas in 1896 to declare independence from Spain, he tore his diploma in 1972 to become an artist and to rediscover his roots.

Before embarking on his own career, Kidlat was instrumental in making Lino Brocka’s You Were Weighed and Found Wanting(1974) possible by introducing the director to small-stake investors. Kidlat has since then epitomized the possibilities of alternative filmmaking and the artisanal mode of production. In 1974, he was cast in Werner Herzog’s The Enigma of Kasper Hauser (1974) as a village chief who plays his nose-flute to keep his tribe alive. The role prefigured the persona that he would assume and exceed in the coming years.

His debut film, Perfumed Nightmare (1977), won three prizes at the Berlin Film Festival. It was distributed by Francis Ford Coppola’s American Zoetrope and premiered in the James Agee Cinema in New York. It tells the story of an alter-ego, “Kidlat Tahimik,” a cab driver under the spell of the American Dream/Perfumed Nightmare. Perfumed Nightmare rehearses the performances in Kidlat’s own life, molding the film as autobiographical and allegorical. It is an anticolonial counter-narrative that would provide the ground for Eric de Guia to assume the identity of his cinematic invention, Kidlat Tahimik.

His next three works continue his quest to film counter-histories and to reinvent his identity. Memories of Overdevelopment, begun in 1980, follows the odyssey of Enrique de Malacca, slave of Magellan, the first man (a Filipino in Kidlat’s fancy) to circumnavigate the world. Who Invented the Yoyo? (1981) is about a man who wants to build a space shuttle out of junk so that he could play yoyo on the moon. The story critiques the idea of space travel as a form of conquest and reclaims the innocence of the act of looking up to the skies. Turumba (1983) tells the story of a rural village that is disrupted and turned into an assembly-line factory by a German businesswoman. It won Best Third World Film at the Mannheim Film Festival. These works bore the marks of their milieu like the other films of the golden age, albeit with a film language all Kidlat’s own. This milieu was defined by Martial Law in the Philippines under the dictator Ferdinand Marcos.

Following his successes in Europe and the U.S., and even with the precarious situation in the Philippines, Kidlat decided to resettle in Baguio with his family. The environment of violence that greeted Kidlat upon his arrival moved him to make a more explicitly political film. This was the disposition of Why is Yellow the Middle of the Rainbow? which he started filming in 1983, at the height of social unrest, and finished in 1994.

It is a freewheeling account of history told through the everyday with one thread of the narrative following the life of Kidlat and his family and the other following the fall of Marcos and its aftermath. But unlike the aesthetics of Third Cinema in Latin America, Kidlat’s film, as with his entire cinema, does not glory in ugliness. His works, even those that lament injustice and violence, are premised on the hope of possible, though yet unrealized, triumph. His constant claim is that whatever “progress” has relegated to the realm of sadness and poverty should never remain self-referentially sad or poor. And the key to understanding this reversal, which precedes social change, is to transgress the bounds of the measures of progress that degrades.

Kidlat probes cinematic form through associative juxtapositions, nondiegetic inserts, asynchronous sound design, percussive musical score, and voiceover, attempting always to arrive at a present and ongoing time. It is this condition of the self-conscious present with its contingencies and ordinariness that defines the way Kidlat looks back to the past and looks forward to the future through his films.

If the direction of Kidlat from the 1970s and 1980s was waking up from the American Dream and heading home, his direction in the 1990s and 2000s was both outward, through his many travels and cultural exchanges, and inward, from the busyness of city life to the restful calm of the mountains. The films of this period document Kidlat’s efforts to reconnect with indigenous Igorot culture and to compare it with other ancient Asian cultures in the Himalayas and especially in Japan. He juxtaposes places, practices, and people — Tibetans and Igorots carrying wood across the forest, kimono-clad women dancing with bahag-wearing men, Igorot gongs clanging from a Japanese farm. The insistence is that age-old traditions in Asia remain vibrant and must continue to resist the consumerist and homogenizing forces of globalization. The films of the 2000s also narrate Kidlat’s decision to retire in the Ifugao rice terraces and live the life of a farmer, no longer as Kidlat Tahimik but as Elder Brother Kabigat.

His last film, Balikbayan #1 (2015) (literally, “the first returning native”), is the completed version of Memories of Overdevelopment, a work that combines his earlier counter-history with his later mode of filmmaking. It won the Caligari prize at the Berlin Film Festival, where he premiered his first film. Itends not only with Enrique de Malacca returning from Europe to the Philippines as a free man, a native and a modern figure at the same time. It also concludes with diary footage of Kidlat telling his grandson about journeys and homecomings and explaining to the spectators why Balikbayan #1, as with his cinema, cannot be concluded but must ever go on in the quest to become, beyond the closing credits.