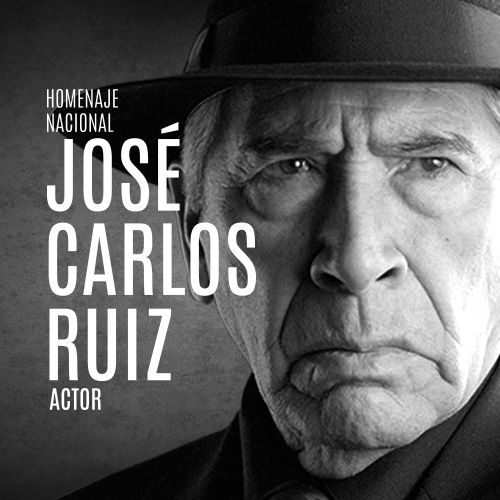 His talent and commitment have made him a crucial presence on the stage, carrying his passion as a banner for more than 60 years.

Through more than 6 decades committed to his art, José Carlos Ruiz has contributed a passionate enthusiasm to his craft. Theater, film, television, literature and even music have benefitted from his commitment and rigor.

He was randomly born in Jerez, Zacatecas and would soon return to Mexico City. Tragedy was flashing through his life from a very early age with the painful loss of his parents. Through different stages, he was an assistant for several trades. It was also at this time that his fundamental passion for cinema, which he inherited from his father, was sharpened; attending a movie theater became a magical, therapeutic and daily task. The screens gave him a space – which could unironically be called “sacred” – where he could leave his pain aside and access some mysterious worlds, even within the soul. Art, though not necessarily by that name at the time, began to exert a subtle influence and the screen’s glare was brighter than any suffering. It would become the path of his life.

An aficionado of music, he tried to study guitar, but fate drove him to theater. His start on the stage came with a scholarship to study at Bellas Artes, where he was exposed for many years to the influence of great personalities such as Carlos Chávez, André Moreau, Fernando Wagner, Torre Lafán, Salvador Novo, and above all, Seki Sano, whom he considers his great theater teacher. Our premiere actor has played most of the classical cannon characters, including those in Greek, Elizabethan and Avant-garde theater. During this time, he had the opportunity to act in small roles alongside great actors who came to Mexico on tour, such as: Madeleine Renoir, Vitorio Gassman, Jean Villar, Jean Louis Barrault etc. He then participated in theater companies such as Poesía en Voz Alta, I.N.B.A, Teatro Club and the IMSS Company in more than 60 plays.

His first opportunity on the big screen came with the 1965 film Viento Negro, directed by Servando González. This film gave him the chance to star alongside mythological big-screen names. Shortly thereafter he dabbled in a medium that him a familiar presence for millions of people: television.

Telesistema Mexicano (later named “Televisa”) starred him in the soap opera El Refugio (1965) alongside Ofelia Guilmáin. Listing the television productions in which he has participated would be an endless task, but we must mention the part that consecrated him in the eyes of a large audience. His work playing Benito Juárez as the lead in El Carruaje (1972) was such that even President Luis Echeverría asked him to appear as him at an Independence Day parade. Other notable television productions he’s starred in include the two versions of María Isabel, Pueblo chico, infierno grande, Soñadoras, and his most recent, Mi adorable maldición and Por amar sin ley, among many others.

Regardless, film remained his favored medium and his filmography is quite extensive. One of his most memorable roles came under the direction of Felipe Cazals, who gave him the opportunity of playing El Carajo, one of the leading characters of El Apando (1976). Other memorable roles include those in films such as Los albañiles (1976), Bajo la metralla (1983), Vidas errantes,  Dos crímenes, Goytia, un dios para sí mismo o En el último trago.

To date he’s been nominated for at least 10 Ariel awards for his work in titles such as Fuego en el mar (1980), Vidas errantes (1985), Toña machetes (1985), Gotita, un dios para sí mismo (1989), Dos crímenes (1994) and Almacenados (2015) (which earned him his sixth Ariel), displaying a mastery of his craft through different eras. He has also been awarded with three Diosa de Plata awards, a New York ACE award, the Bochica from the Bogotá Film Festival, the Silver Mayahuel, a tribute at the Guadalajara International Film Festival as well as several retrospectives and awards.

José Carlos Ruiz has also dabbled in literature, first as a reader and then as a writer. His first book was the testimonial work Yo no fui a la escuela, fui al cine, written in collaboration with Eduardo de la Vega Alfaro. He then published the volume Correas de un mismo cuero, coedited by the Secretary of Culture through Fonoteca Nacional. In the latter, the author put together 24 stories and 15 poems he had been polishing for 50 years during the respites that acting allowed. Gifted with a great sense of orality and a Sharp ear, José Carlos shows his worth as a master of the verb. The prologue by Juan Villoro illustrates this opinion eloquently.

As part of the 22nd edition of the Guanajuato International Film Festival, we are honored to pay tribute to a man who has been a vital presence of the stage and the screen for more than half a century, as well as a decent and admirable human being who has won the hearts of audiences at home and at the movie theaters through his passionate work, always regulated through an accurate intelligence that makes José Carlos Ruiz a vital presence in our country’s artistic landscape.