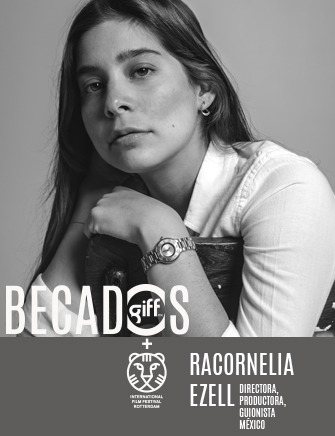 Ezell is a director, producer, screenwriter, and consultant. Feminine energy is her muse and source of answers. Trained in performing arts from early  childhood, she attended the Writing for Film and Television program at Vancouver Film School and is a two-time winner of the Latin American Script Competition.

Ezell participated in the development, writing and creative production process of films selected at international festivals including Venice and San Sebastián, as well as in series produced by Netflix and Amazon.

She is currently working on the post-production of her feature film project MACDO, which will have parallel exhibition outputs as video installation and interactive digital platform.

Her production company, Enantiodromia, was founded with the mission to create a safe and inspiring environment to encourage young people of diverse backgrounds and identities to create in their authentic voices.

Out of that company spirit, the “Intuitive Film Creation Workshop” was born. Held online, the workshop seeks to democratize access to filmmaking for emerging creators.